In 2021 we will be having virtual events and special gatherings. Stay tuned for more information.

In 2020 the International Women’s Day 2020 campaign theme is #EachforEqual.

In 2019 we hosted a private Salon Gathering Fireside Chat event.

In 2018 we cancelled our Santa Barbara event due to the fires and subsequent mudslides.

For many years our Empowering Women TV team has celebrated International Women’s Day in Santa Barbara.

In 2017 we co-sponsored a Be Bold for Change sunset reception on Antioch University’s beautiful rooftop patio with The Santa Barbara Hustlers for Humanity Team.

In 2016 we promoted women’s events throughout the Santa Barbara Community, including the Empowered Women Luncheon by the Goleta Valley AAUW.

In 2015 we hosted a small trade show at Butler Event Center with an ongoing series of speaker, workshops and vendors. Wonderful memories!

In 2014 we covered the enormous Women’s Festival at the Earl Warren Show grounds featuring the Gusty Gals Inspire Me Awards. Our team of host interviewed dozens of speakers, award winners and attendees.  We also sponsored, in collaboration with our dear friend Emilanio Campobello, the screening of  FEMME: Women Healing the World, followed by a Q & A panel with Celeste Yarnall and Barbara Gaughen-Muller.

In 2013 supported the Festival from afar with publicity and encouragement of the Gutsy Gals Inspire Me Awards and message from Lynda Weinman of Lynda.com.

In 2012 our founder, “Twinkle” Marie Manning was part of the Expert Panel Discussion: The Runaway of Life: Modeling a New Role 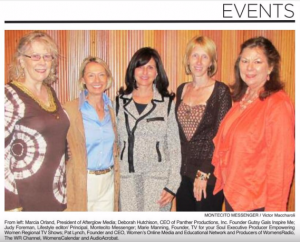 our many volunteers, including The SB Hustlers for Humanity;

and mentorship and support of three amazing women: