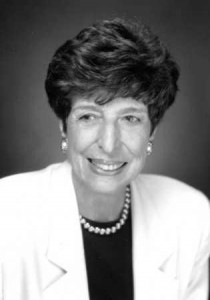 Phyllis P. Godwin, Owner of Granite City Electric, was one of our early guests on Empowering Women Boston-Hub.  She was interviewed by our Host Pat Hopkins, who happens to be a close friend and colleague of Phyllis’s.  As such, the discussion centered largely around “Mentoring.”

She is truly an icon of women’s empowerment and entrepreneurial spirit!  With no female business leaders to guide her, Phyllis drew inspiration from feminist Betty Friedan’s best-seller ‘‘The Feminine Mystique.’’ She still has a well-read copy on the bookshelves of her Marina Bay condo.

As a young woman she married and for the next 22 years she stayed home to raise their two daughters. The Godwins divorced in 1969, and her future took a surprise turn: Her father’s health was beginning to fail, and he was worried about inheritance taxes, so he transferred his stock to Phyllis.    She had three choices – sell her shares, let outside managers run Granite City, or run it herself. At 43, she went back to college, for a master’s degree in business administration at Suffolk University – the first step toward taking the reins she never thought would be hers.  Her father died in 1984. By 1988, she had supervised the opening of three branches in Plymouth and on the Cape and Martha’s Vineyard.  That same year she was invited to be the first woman member of the Quincy Rotary Club. Her star was rising.

Since her stepping into her leadership role, the area’s business community has felt her quiet influence for years – former South Shore Chamber of Commerce director Ron Zooleck praises Godwin as ‘‘the first lady of the South Shore’’ – she’s drawing scholarly attention as well.  She was ranked No. 7 in the state at a Babson College survey of companies run by women.  Under her tenure, an $18 million local enterprise grew into a $100 million regional power, with sponsor displays at Fenway Park and Gillette Stadium for national sports audiences to see.

For a generation of South Shore business women, that ranking confirmed the status Godwin holds as an adviser and role model.  As the first female president of the South Shore Chamber of Commerce and first female member of a local bank board, Godwin became the example and inspiration she never had when she was blazing her own trail as a female executive in the 1970s and ’80s.