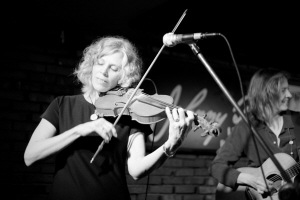 Jane grew up in Texas, studying classical violin and piano.  As a teenager, she picked up the guitar and started writing and performing her own music.  While still in highschool, she performed as a young singer/songwriter all around Houston, including the famed folk club Anderson Fair.  After graduating highschool, she toured and recorded with the popular Texas progressive country-rock band, Dogtooth Violet.  With this group, she shared the stage with musicians such as Lynard Skynard and Louisiana & Texas Blues man Clarence Gatemouth Brown.  Jane spent her years as a 20-something in LA, where she married and started a family.  She eventually ended up in NH, where she raised her family and became a music teacher, specializing in young children.  As her children grew older, she took up celtic fiddling and learned Irish & Scottish fiddling styles.  She has performed in several Renaissance Fairs and various musical theatre formats.  She eventually made her way back to her singer/songwriter roots by becoming the newest member of the Porch Party Mamas.