“Twinkle” Marie Manning is the Founder and Executive Producer of our Empowering Women Movement. 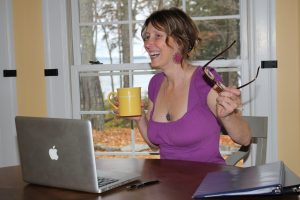 Today Twinkle considers herself semi-retired. She spends much of her time immersing in the landscapes of Maine’s Moosehead Lake where she and her husband share a home. She writes poetry, creates art, offers workshops and facilitates retreats. Her love for collaborative media is still present: She hosts one VIP Empowering Women event each year and still guides those who wish to create an Empowering Women presence in their communities.

When she created the Empowering Women TV media platform, she was joined by a growing group of regional casts and production teams.  She drew upon her varied and vast skills in writing, development and marketing to accompany her production excellence.

Who is she to the many who know her, and who have worked with her?

She is a freelance writer, editor, non-profit leader, television and radio talk show host, published poet and author, and the creative force behind   TV For Your Soul, a grassroots television production company dedicated to bringing positive shows to the airwaves.  She was a magazine editor and columnist for many years. (see Twinkle’s fuller photo and video gallery on TV for Your Soul’s page HERE)

Over the years “Twinkle” also worked with select clients who have a deep desire to create amazing media content that illuminate their messages.  She uses her twenty plus years of professional experience combined with innately intuitive skills to draw out the most authentic essence of her clients to shine through on camera, and in her written word. In addition to her media work, to this day she is sought after as a Talent Manager, quietly working in the best interest of high profile clients.

Twinkle was nominated for the 2014 Gutsy Gal Awards and  was delighted to be presented with her certificate at the International Women’s Festival in Santa Barbara.

In April 2013, Marie presented the first Empowering Women Boston Hub live-studio-audience event featuring Anita Diamant, Author of The Red Tent, in a live studio audience for an interview about the responsibility of women in community.   At that event she was honored with a citation from State Representative Cory Atkins, for her work towards women’s empowerment.

Twinkle spoke on the Expert Media Panel at the Santa Barbara Women’s Festivals in March 2012.  Also in March of that year her story was featured in Life By Me.

In October 2012, Marie brought TEDxWaldenPond to her then home town of Concord, MA.

Twinkle was honored with the 2011 Producer of the Year Award at LexMedia, in the Greater Boston, Massachusetts Area.

She was a PBS affiliate producer and television talk show host and has interviewed a wide variety of notable people from Nobel Peace Laureatte Betty Williams and Pro Surfers Lisa Andersen and Kelly Slater, to Rock Stars Eddie Money and Neil Giraldo and NBA Allstar Vince Carter.  Known for her innate skill at creating a welcoming atmosphere that allows every guest to be comfortable and speak with ease, Twinkle enables those she interviews to truly have their light shine on camera and have their authentic messages heard.

As a poet and writer, she has been called upon to craft celebratory and memorial pieces to be read in public and also used as meditations and rituals. She has been included in many poetry anthologies as well as has published poetry books.

Twinkle, in her role as peace activist and women’s advocate, has been the keynote speaker at One Billion Rising in Concord for the past two years and spot at the World Peace Conference in 2012.  She has also spoken at several International Day of Peace events, two in Florida, three in Massachusetts. (1, 2, 3) and four in Maine (1, 2, 3, 4) – including hosting Peace Day Walkers at her retreat home.

In her personal and service life, Twinkle leads women’s workshops and rituals that celebrate the cycles of the Earth in the sacred feminine tradition.  She has co-taught cultural history classes exploring aspects of the Feminine Divine in relation to the indigenous cultures who honored the Earth; how they did so in ancient times – and how the do today.

Twinkle is the author of Intentional Visualization, and has created her own publishing branch, Matrika Press, to publish anthologies, poetry, memoirs and more.  An ongoing publication Twinkle curates for Matrika Press is the “Women of Spirit” Series She is also the creator of the Blessing Book Series, and her seminal theology is presented in Living Life as a Prayer published in 2020. Her Amazon Author’s  and Goodreads profiles details many of her books!

After an almost year long sabbatical in California, during which time she helped with several productions in San Diego and Santa Barbara, including hosting an International Women’s Day event with Empowering Women TV, in 2015 Twinkle purchased a century old farm house in Pittsfield, Maine! Like all her homes used as a gathering place, it, as all her homes, is called Twinkle’s Place and she is delighted to have it serve as a Spiritual Center and the next phase of her growing ministry offerings.

In 2018 Twinkle’s Place grew – she created Moosehead Lake Retreats and in 2020 she registered The Church of Kineo. Twinkle now resides full-time on majestic Moosehead Lake in Maine. 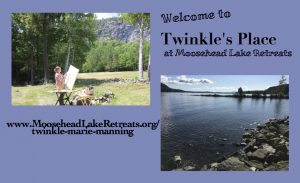 As mentioned at the outset above: today Twinkle considers herself semi-retired. To stay up to date with her activities and offerings, visit her Event Page on Twinkle’s Place, her Retreat Page at Moosehead Lake Retreats, and check back often on the Empowering Women Website for details about upcoming productions.

Twinkle, thank you for all you’ve done to support and spotlight Empowering Women. 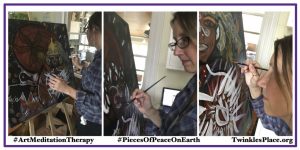